Heavy duty hinges from McMaster Carr have arrived.  I'm using a salvaged 36" fire door for my initial door blank.  To that I will add a layer of wood veneer on the outside for looks and a layer of 3/4" cabinet grade plywood to the inside with a layer of GreenGlue between the firedoor and the plywood.

The Plywood will be stepped in 1" from the edge of the firedoor, and will be attached with a metal strip running around it's edge.  So we will end up with a seal on the fire door, then a step to a seal to the plywood, with another magnetic seal to the metal strip on the plywood. 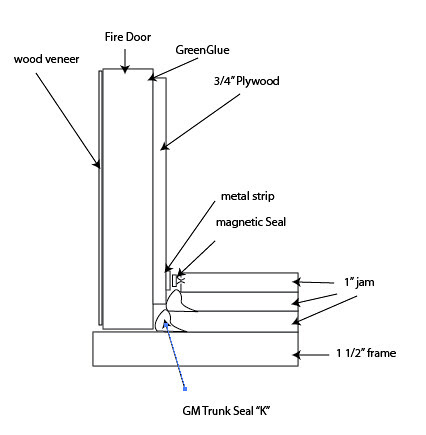 3 seals with a drop seal on the bottom when the door is closed with a seal on the threshold as well.

I'm following the design of Rod Gervais's "Super Door", he used a wooden door with lead sheet between the plywood, so I am taking his design and modifying it a little.  The idea is mass mass mass and air air air.  No airflow, heavy mass.

Also on order are 60 Sheets of Owens Corning 703 rigid fiberglass.  They will be put into wooden frames and covered in a burlap type of fabric to be room treatment on the walls.  We'll get there!