The Magic of Marketing

Ok. I have an agent. James Pentaudi of Albany talent is one of the people that represents me and gets me work. Great guy, been with him for years and love working with him.

He books me for an on-camera shoot at an Albany studio doing pharmaceutical training material. I'm to play a patient with an unknown stomach ailment. I get the script a week early, it's a couple of paragraphs so I memorize it before the shoot, bring in a couple of oversized shirts as requested, show up ten minutes early, get my make-up done and I'm ready to rock.

Here's the fun part, the actors roster of who is going to be in for these several days of shooting is a long list of names. First and last. Except me. 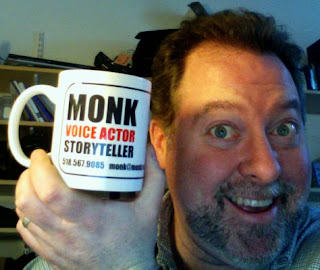 I'm Monk. That's all it said. 2:30PM, playing the part of Frank Heller, Monk.  When I walked onto the set, the director yells "MONK!" The producer greets me as well. I handed off to the associate producer one of my Monk mugs, and she makes sure everyone knows that she has her own personnel Monk mug.

I am by no means a big fish in this sea, but name recognition, and friendly greetings and working with the same company a couple times on bigger and bigger jobs.... Nice.
Posted by Monksvoice at 12:51 PM No comments: